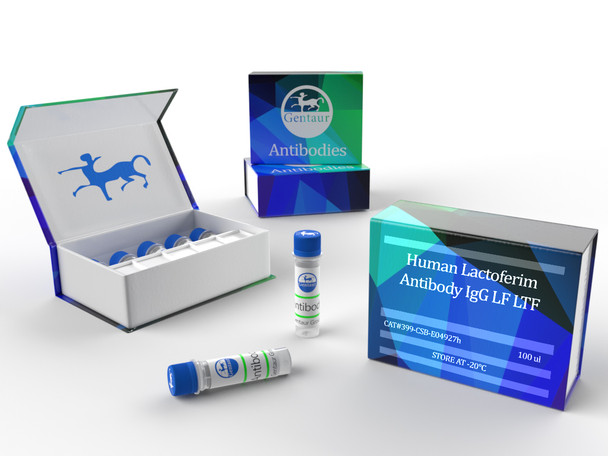 Lactoferrin (LF) is an iron binding glycoprotein. LF consists of a single polypeptide chain (approximately 80 kDa) folded into two structurally homologous lobes, each of which can reversibly bind one ferric ion (Fe3+). LF is found in external fluids, including milk and mucosal secretions, and is a prominent component of secondary granuals of neutrophils. The protein demonstrates a broad spectrum of properties, including regulation of iron homeostasis, host defense against a broad range of microbial infections, anti-inflammatory activity, regulation of cellular growth and differentiation and protection against cancer development and metastasis. LTF acts as a major first line defense against microbial infections, partly due to its ability to efficiently bind to and hence remove Fe3+ from the environment, but studies have also shown that LTF possesses bactericidal properties and proteolytic activity, capable of cleaving arginine-rich sequences within microbial proteins. Three isoforms of LTF have been identified: LTF-alpha, LTF-beta and LTF-gamma and receptors for LTF are expressed in the gastrointestinal tract, by macrophages, lymphocytes, neutrophils and platelets and also by some bacteria.