Structurally speaking, ribonucleic acid (RNA) is quite similar to DNA. However, while DNA molecules are typically long and double-stranded, RNA molecules are much shorter and typically single-stranded. RNA molecules perform a variety of functions in the cell, but are primarily involved in the process of protein synthesis (translation) and its regulation.

RNA is typically single-stranded and is made of ribonucleotides that are linked by phosphodiester bonds. A ribonucleotide in the RNA strand contains ribose (the pentose sugar), one of the four nitrogenous bases (A, U, G, and C), and a phosphate group. The subtle structural difference between the sugars gives DNA additional stability, making it better suited for storing genetic information, while the relative instability of RNA makes it better suited for its shorter-term functions. RNA-specific pyrimidine uracil forms a complementary base pair with adenine and is used in place of the thymine that is used in DNA. Although RNA is single-stranded, most types of RNA molecules show extensive intramolecular base pairing between complementary sequences within the RNA strand, creating a predictable three-dimensional structure essential to their function (Figure 1 and Figure 2).

Cells access information stored in DNA by creating RNA to direct protein synthesis through the process of translation. Proteins within a cell have many functions, including building cell structures and serving as enzyme catalysts for cellular chemical reactions that give cells their specific characteristics. The three main types of RNA that are directly involved in protein synthesis are messenger RNA (mRNA), ribosomal RNA (rRNA), and transfer RNA (tRNA). 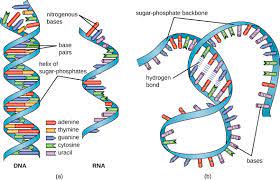 In 1961, French scientists François Jacob and Jacques Monod hypothesized the existence of an intermediary between DNA and its protein products, which they called messenger RNA. [1] Soon after, evidence was collected to support his hypothesis, showing that information from DNA is passed to the ribosome for protein synthesis using mRNA. If DNA serves as the complete library of cellular information, mRNA serves as a photocopy of the specific information needed at a given time that serves as instructions for making a protein.

The mRNA carries the message of DNA, which controls all cellular activities in a cell. If a cell requires a certain protein to be synthesized, the gene for this product is "turned on" and the mRNA is synthesized through the transcription process (see RNA Transcription). The mRNA then interacts with ribosomes and other cellular machinery (Figure 3) to direct the synthesis of the protein it encodes during the translation process (see Protein Synthesis). MRNA is relatively unstable and short-lived in the cell, especially prokaryotic cells, ensuring that proteins are only produced when needed.

RRNA and tRNA are stable types of RNA. In prokaryotes and eukaryotes, tRNA and rRNA are encoded in DNA and then copied into long RNA molecules that are cut to release smaller fragments that contain the individual mature RNA species. In eukaryotes, synthesis, cutting, and assembly of rRNA into ribosomes takes place in the nucleolus region of the nucleus, but these activities occur in the cytoplasm of prokaryotes. Neither of these types of RNA carry instructions to direct the synthesis of a polypeptide, but they do serve other important roles in protein synthesis.

Ribosomes are made up of rRNA and proteins. As its name suggests, rRNA is a major component of ribosomes, making up about 60% of the ribosome by mass and providing the location where the mRNA binds. RRNA ensures proper alignment of mRNA, tRNA, and ribosomes; ribosome rRNA also has enzymatic activity (peptidyl transferase) and catalyzes the formation of peptide bonds between two aligned amino acids during protein synthesis. Although rRNA was long thought to have a primarily structural role, its catalytic role within the ribosome was demonstrated in 2000 [2]. Scientists in the laboratories of Thomas Steitz (1940–) and Peter Moore (1939–) at Yale University were able to crystallize the ribosome structure of Haloarcula marismortui, a halophilic archaeone isolated from the Dead Sea. Because of the importance of this work, Steitz shared the 2009 Nobel Prize in Chemistry with other scientists who made significant contributions to understanding the structure of ribosomes.

Transfer RNA is the third major type of RNA and one of the smallest, usually only 70 to 90 nucleotides in length. It carries the correct amino acid to the protein synthesis site on the ribosome. It is the base pairing between tRNA and mRNA that allows the correct amino acid to be inserted into the polypeptide chain that is synthesized (Figure 4). Any mutation in the tRNA or rRNA can result in global problems for the cell because both are necessary for proper protein synthesis.